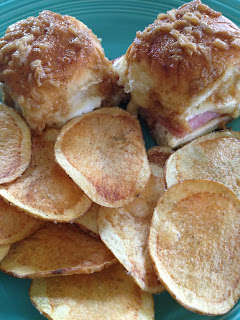 I am often looking for unique casual get-together foods.  Dishes that are slight twists on the average fare that people might serve or bring to a party.  These tasty little sammies are an adaptation of the “Sassy Ham and Cheese Sandwiches” shared by Caryn Ross on Food Network.com and in many varieties all over the web, so I can’t take total credit for them.  However, baking them in a cast iron pan is one of my adaptations.  Cooking in cast iron causes the buns slathered in oniony-cheesy goodness to crisp and really adds to the flavor.  And of course, it wouldn’t be a recipe of mine if there weren’t some additions of great spices to jazz things up a bit. In this case, the addition of fresh grated nutmeg which I often pair with dishes that include Swiss cheese.

As I shared in my Grown-up Mac & Cheese recipe, I use nutmeg in many savory dishes including my chili for an added depth to the flavor that will have people asking what they are tasting. Nutmeg is the hard, brown seed from the nutmeg tree which is a tropical evergreen tree.  Most cooks prefer to grate it fresh from the seed.  The seed should be stored in an airtight container, away from heat, moisture and sunlight.  Though there is some disagreement about storing dry spices in the freezer because they may lose potency, I do store my nutmeg seeds and my ginger root in the freezer.  I pull them out and grate them fresh whenever I need them.  I store them for many months, and have not noticed either losing any flavor or aroma.

Why cook with cast iron?? Cast iron is a great heat conductor so it’s the optimal choice for a perfect crisp. Well-seasoned cast iron is virtually non-stick, so you can use less oil when cooking.  Cast iron, when cared for, lasts for decades.

Preheat the oven to 350 degrees. 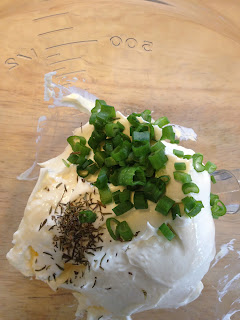 Mix together the cream cheese, nutmeg, thyme and green onions. Grate the Swiss cheese.  Set aside. 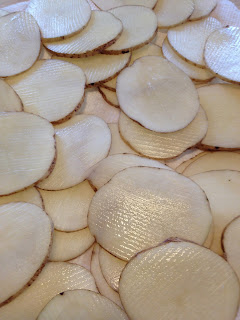 Thinly slice the potatoes.  I use a mandolin to ensure even slices and that I still have fingers when I am done slicing. Pour about 1 1/2 inches of vegetable oil in a skillet for frying the chips.  Preheat over medium high heat to 350 degrees, being careful not to go over the smoking point. 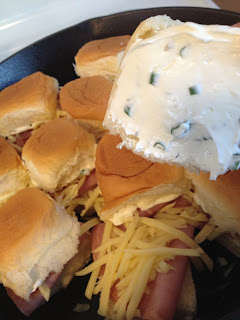 Cut the rolls in half and place the bottoms in the cast iron skillet.  Top each with a couple slices of ham and some of the Swiss cheese.  Spread a large dollop of the cream cheese mixture on the top roll and place on the sandwich. 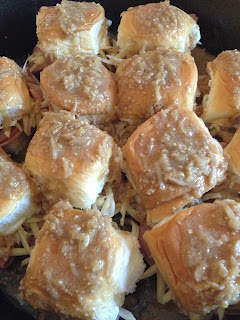 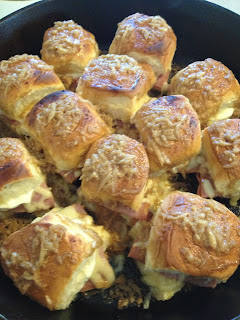 Cover the skillet with foil and bake for 20-25 minutes.  Remove the foil and and bake an additional 5-10 minutes to brown the tops. 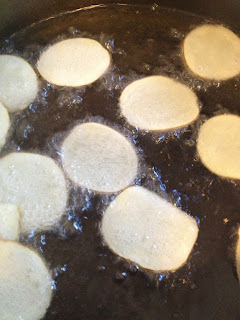 While the sandwiches are baking, fry the potato chips.  Take a paper towel and be sure to dry the slices.  Carefully place 9-12 potato slices in the hot oil.  Do not over-crowd the oil. Fry until golden brown, turning once half-way through. 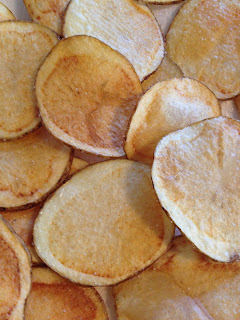 Remove the chips from the oil to a plate lines with paper towel to drain.  Generously sprinkle with coarse ground sea salt or kosher salt and pepper while the chips are hot. Replace the towels between each batch. 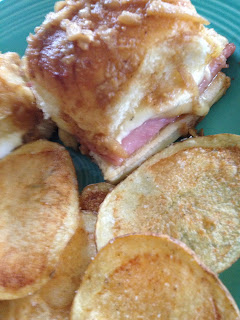 Serve the sliders and chips.  My favorite way to eat homemade  tater chips is to dip in a thick bleu cheese dressing. Mmmm! 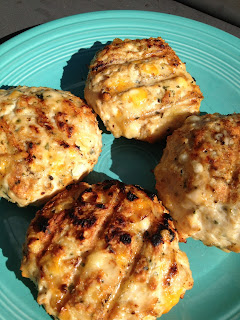 It’s a beautiful day out and I want to toss something on the grill.  I open the freezer and find very little looking back at me.  I always keep a couple of packages of ground chicken on hand for my Buffalo Chicken Meatballs in case I need a quick appetizer for a get-together.  So, I think…hmmm…what if I tweak that recipe and make burgers!??! I really love when an experiment turns out as tasty as it is in my mind when I am throwing it together!

1 C Light Mayonnaise (I suppose you can use Miracle Whip if you prefer, just don’t tell me if you do!)
4-5  Roasted Garlic cloves
pinch of salt & pepper 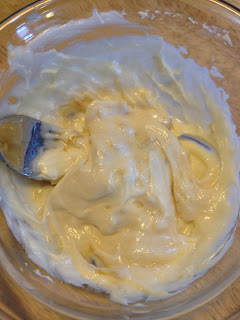 Mix ingredients together and refrigerate until ready to use.  Letting the ingredients marry for a day will give your mayo a great garlicky flavor. 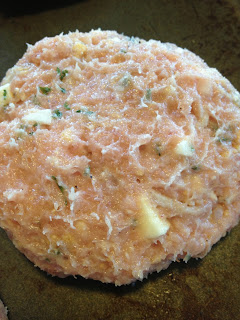 Mix all of the ingredients.  Divide the meat mixture into four sections and form patties.  Drizzle with olive oil.  I used Garlic Infused Olive Oil from The Olive Twist.  Grill at 350-400 degrees for about 8 minutes per side until fully cooked.  The internal temperature should be 165 degrees and the juices should run clear. Avoid over-cooking as the burgers will be very dry. 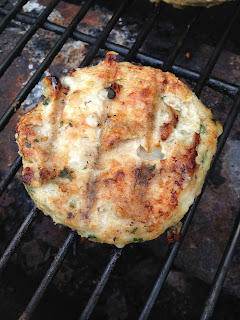 Serve on a bed of lettuce and top with a dollop of the Roasted Garlic Mayo for a healthy burger meal. This burger would be great on a whole grain bun with lettuce, onion and avocado slices.  You could also substitute Bleu cheese for the Feta and top with barbecue or buffalo sauce. Or, with Cinco de Mayo coming up, substitute Monterey Jack or Pepper Jack cheese for the Mozzarella and top the burger with guacamole and salsa . The combinations are endless! 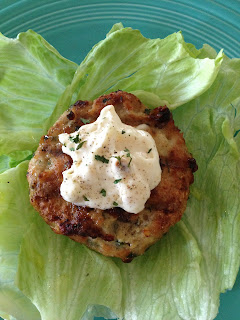